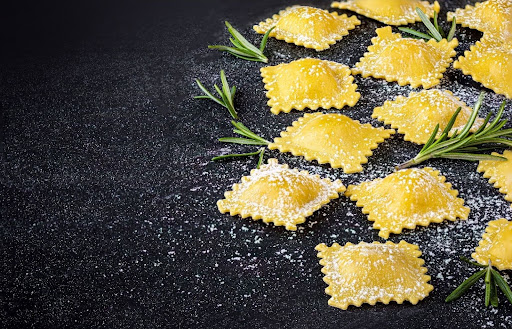 Making a ravioli vs tortellini comparison, or even simply trying to determine similarities and differences, can be a very subtle and complicated endeavor. The almost infinite number of Italian pasta shapes and uses has developed and evolved over centuries, and the threads of their developments don’t progress in a linear fashion. They sometimes criss-cross, sometimes merge, and at each juncture they spawn their own local stories.

Obviously both ravioli and tortellini are filled pasta. Clearly, their shapes are different. Is that the end of the story? Let’s unpack that a bit, starting with some history.

Filled pasta has a long history in Italy; we know that much, even if the exact origins are vague. Originally, the term tortelli referred to all filled pasta. Tortelli was derived from “Torta” which is a savoury medieval pie, so that makes perfect sense. Over time, tortelli evolved into tortellini and various other filled pasta names.

The first definitive mention of ravioli was the 14th century in a letter written by Italian merchant Francesco di Marco Datini. The letter described a pasta that was filled with green herbs, fresh cheese and egg, simmered in broth. The word “ravioli” is thought to come from the Italian word riavvolgere, which means “to wrap,” though some think ravioli is named after a 13th century chef from the Genova Republic (Liguria) called Ravioli. Ravioli is most often square, semi-circular or circular. Ravioli looks like a pillow, which perfectly symbolizes its sleepy back-story. Ravioli can take a small pillow or single-serving large pillow form.

Both the shape and the explanations of ravioli’s history are fairly boring. Torellini’s story, on the other hand, is mythical, starring a beautiful goddess and a lecherous peeping Tom. The story goes like this: Venus, the goddess of love, spent a night in a Castelfranco Emilia inn. The inn-keeper caught a glimpse of the naked goddess through the keyhole of her room. Awed by the vision, he rushed to the kitchen and created the tortellini pasta shape, inspired by Venus’s navel. Italians also refer to Tortellini as ombelici , meaning belly buttons. And that’s exactly what tortellini look like: a ring around an indentation or hole.

Tortellini and its inventor have even inspired an annual festival in Castelfranco Emilia. The tortellini festival features parades of people in Renaissance costumes and re-enactments of the legend — all family friendly, of course!

However, there are others who say the tortellini shape was created as a practical method to make sure the filling stayed in its wrapping when being cooked. We’ll let you choose which story you prefer to believe.

Ravioli vs Tortellini: the fillings and sauces

Traditionally, ravioli generally featured a vegetable filling with meat, cheese and egg playing a secondary role. The result was more delicate than tortellini that were most often filled with meat, eggs and cheese.

Today, it is fair game to fill either ravioli or tortellini with whatever you can imagine. There are even deep-fried dessert ravioli filled with sweetened ricotta and spiced with cinnamon.

Let’s Pasta carries an extensive range of ravioli and tortellini to satisfy any savory desire you may have. Our ravioli is filled with taste-stimulating combinations of vegetables, cheeses and meat or seafood. Try our Creamy Artichoke and Lemon Ravioli, our Gorgonzola and Pear, or our Prosciutto Fig and Mascarpone concoctions. If you crave a more meaty version give our Buffalo and Blueberry Ravioli a try or our Barolo Braised Beef Ravioli. Peruse our pasta page, there are a couple of dozen different flavor sensations of ravioli sure to hit the spot, in small to large sizes.

We’ve also developed a nice range of tortellini, mostly meat filled such as our Rosemary Chicken Tortellini, but also a few cheese or vegetable offerings such as our Feta and Sun Dried Tomato Tortellini.

Ravioli vs Tortellini: Try them both

In the end, why not try them both and make up your own mind? The different shapes adds to the fun and adventure of the vast pasta experience. 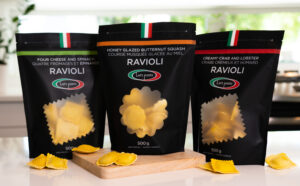 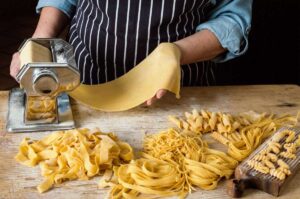 Fresh vs Dried Pasta: Which is Best? 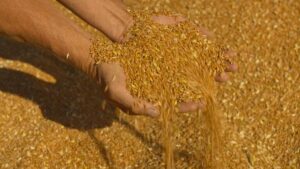 Why is durum semolina the best for pasta?